One Year under Bill C-89 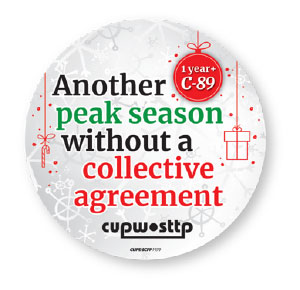 Bill C-89, An Act to provide for the resumption and continuation of postal services was passed by the federal Liberal majority in the House of Commons on November 24, 2018 and took effect at noon on November 27. One year has passed.

Though the legislators who passed the bill may have thought it would resolve the situation, nothing is fixed, no contract is in place, and we’re still working without a new collective agreement, without the right to strike, under the dangerous and unfair conditions that we were trying to deal with in negotiations.

It Didn’t Have to be this Way

Canada Post Corporation (CPC) should have addressed our issues directly and seriously in the months of bargaining that preceded our strike. When they didn’t, the federal government should have told CPC to address our concerns  they knew that precarious working conditions were a problem, they knew about our injury crisis, and they knew that equality for RSMCs was incomplete.

Instead, when the crunch came, the government backed up the employer and shut down our Charter right to free collective bargaining.

The NDP stood up for us, and the Bloc Québécois MPs stood up for us. They spoke and voted against the bill. The Conservatives mostly avoided the vote, and all but six Liberal MPs voted in favour of the Act, knowing that the last such legislation had been struck down as unconstitutional.

Meanwhile we know that bargaining was making progress last year! In spite of the legislation, CUPW and CPC agreed this summer to implement some conditions that were agreed to at the table. Collective bargaining works.

On December 11, 2018 we filed a human rights challenge, on some of the same grounds as last time – which was successful. The right to strike is an essential part of the fundamental freedom of association.

It’s worth noting that this year we worked through many cases of members being compensated for entitlements that the 2011 back-to-work legislation took away, which were restored and due to the members once justice Firestone declared that act unconstitutional in 2014. It’s a matter of principle, but it also has real effects on members.

While the 2018 challenge finds its way through the court process, we are back at work under the conditions of expired collective agreements that gave us such problems.

We’re working another peak season in the same conditions that gave rise to our injury crisis. RSMC members are working unpaid hours.

We’re making a button for members to wear, to show co-workers and the public that we don’t forget, and remind them that we’re still working under expired conditions, deprived of our right to strike.

Members are right to be frustrated and we are too. In the past year, we’ve explored different opportunities to get Canada Post Corporation back to the bargaining table, and we maintain that a negotiated settlement is the only way to address our issues in the long run.

While we try to restore collective bargaining, we’re making the best we can of this situation.

We can do better, once our collective bargaining rights are restored and respected.