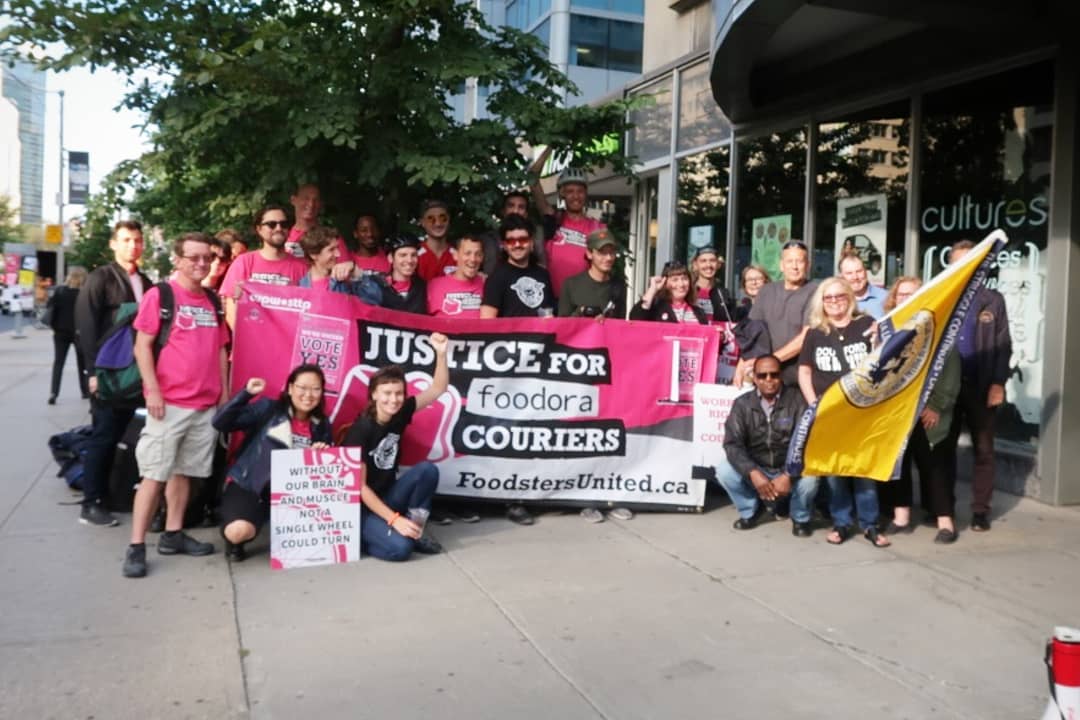 An update on the Justice for Foodora Couriers campaign

Since May 1, when this campaign launched, the organizing campaign by Foodora couriers in Toronto and Mississauga has been intense and high-profile. CUPW is proud to join their struggle and welcome them as members. Since our last bulletin on the campaign, we’ve accomplished a lot.

As well as expanding our membership (once we win) and defending the rights of vulnerable gig workers, the campaign has taught CUPW a few innovative tactics and added to our external organizing savvy. It’s not quite the kind of workplace that CUPW has organized in the past, but we know delivery work and we are familiar with the working conditions that the couriers need to address.

When the National Executive Board (NEB) approved the drive to join CUPW in early 2019, we started preparing for a public launch of the campaign.

Most of our organizing drives are long-term, and become public only once we’re well-positioned for certification. But the nature of a platform-based workplace is different and requires a different approach. When we launched Justice for Foodora Couriers, our goal was to build profile to help recruit.

The app-based workplace is decentralized and workers are relatively isolated. Dispatch is through the workers’ phones, and they don’t have a physical work headquarters or employer-provided gathering spaces.

Going public helped us map the workforce — on the street and through ally networks — to reach as many couriers as possible to sign cards.

It takes a courier to find a courier. Cyclists and drivers hit the streets, focusing on restaurant locations known for frequent pickups, and high-visibility street corners. Bike couriers would offer to do ‘ride-alongs’ with prospects to talk shop and discuss the working conditions that need improvement. Foodsters also set up on high-visibility street corners and do tried-and-true tactics like flyering and one-on-one conversations.

We equipped allies to do “order-in” actions days: our comrades would order food from Foodora, and when the food arrived, our info kit would help them talk to the courier, and encourage them to get informed and join up.

Presence at anti-poverty actions, cycling community events and races, and other labour events were also key to raising public profile. The couriers put workshops on workers’ rights and other topics. The foodsters marched in May with the support of hundreds of CUPW convention delegates, and finished the summer by leading the Toronto Labour Day parade. Advertising, positive media, and social networking have been effective – and crucial.

Hot Summer in the Spotlight

The mainstream and social media profile of the campaign has been very helpful. By connecting with the international #justice4couriers movement and by being bold and open with the media, the foodsters found a lot of traction. For mainstream media in Canada, this campaign has become a way into a complicated discussion: gig economy worker exploitation conditions and what can be done to change them.

We’re used to having to do the work of explaining our workplace issues and our demands. For the foodsters, the record-breaking hot and busy summer in Toronto meant that everyone living in the city could feel the stress and relate to the working conditions that couriers experience.

At the same time, labour has been debating how to take on the gig economy for years. The foodora couriers emerged as the real deal: a serious and successful group of workers in the gig economy who are making change. Labour leaders and academics are lining up in support. It helps also that UFCW launched their campaign to sign up Uber drivers during an important phase of our campaign.

In July, the NEB decided to apply for certification with the Ontario Labour Relations Board. The OLRB held a certification vote from August 9 to 13.

We embarked on an intense week of phone calls, texts and other contacts to pull the vote, and the courier population responded. The vote is in, but ballots won’t be counted until the labour board has settled a few issues in dispute between CUPW and Foodora.

It’s been inspiring to work with the couriers. Before they approached CUPW for membership, they had spent about a year organizing themselves. The couriers’ approach to their campaign has been creative, passionate, and focussed.
They’re not all as young as the stereotype of gig workers, but they are future-oriented. They’re serious about workplace democracy and improving conditions. They’re making a significant impact on the future of workers’ rights and justice, and CUPW shares these values and we choose to put our union at the forefront of this struggle along with the couriers.

This is how our union grows, and the additional strength and energy that the couriers bring to CUPW will benefit us all. Support Justice for Foodora Couriers – it’s good for the union as a whole and for all postal workers.